According to the U.S. Department of Energy, the average monthly electric bill hovers just over $110. If you live in states like New York, Massachusetts, you’re probably used to paying almost double that amount. I think back to the first apartment I rented straight out of college around 2014 that was built in the 1980s. It was very poorly insulated, which led to extremely high electric bills each month, despite never being too comfortable to begin with.

If you find yourself renting (like I have), you have zero control over the type of heat pump, hot water heater, or other hardware that is installed. For me, I was stuck with an old air conditioning unit that ran all the time, and was extremely inefficient. If you’re living in an apartment, you may be able to relate. For anyone looking to save on the cost of heating or cooling your apartment, here are a few of the easiest ways to lower your electric bill:

Close The Blinds and Shades in the Summer

In the summer, leaving your blinds open may be costing you. According to Energy Impact Illinois, by simply shutting your blinds when you are away at work can save you 10 to 15 percent on your home cooling costs.

Pay attention to your windows facing south and west, as these tend to be exposed to sun the longest throughout the day. Leaving blinds and shades open in the winter is a easy trick for warming up a room exposed to direct sunlight.

Having blinds or curtains closed can help insulate your space in the winter, but less so for modern apartments that are built with energy efficient windows.

Only Spending Time in a Couple of Rooms? Try a Space Heater

If you’re working out of a 10 by 10 ft. spare bedroom or home office, for example, investing in a small space heater may be a great option for lowering your monthly electric bill. Say, for example, you are spending 5 hours per day working out of a single room. Expect to save around $22 per month, assuming you have it on 5 hours per day, use 1500 watts of power at a price of 10 cents per kWh. You can estimate your own cost savings using this calculator.

My personal recommendation for spaces less than 150 square feet has to be the Vornado Whole Room Heater. This little thing packs a punch, and is made well. I found a few on eBay and Amazon brand new for around $100. Click here to check the current price on Amazon. I’ve used it for several years, dating back to college, and have never had a problem with it overheating. I’ve even left it on all night, which I wouldn’t recommend. 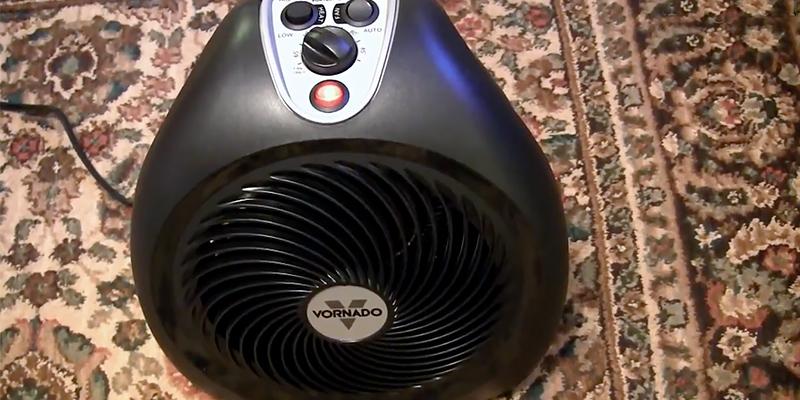 This one is really easy to operate, with a big orange on/off, and has several hi/low settings. For the size of it, fits just about anywhere (I store mine on the top shelf of my closet in the summer). The fan is pretty powerful compared to other models I’ve seen, and can probably be used in the summer in certain situations. The important thing to remember when using space heaters is to avoid leaving your thermostat at it’s current setting while using it. This is why these work best for bedrooms, or small apartments.

Bump Up the Thermostat in the Summer, Use Ceiling Fans

Experts say that when using ceiling fans in the summer, you can bump your thermostat down by four degrees without noticing a difference.  By lowering your thermostat by 1 degree, the Department of Energy estimates that you can save around 3 percent of your total heating bill for each degree lowered in the winter.

However, not all ceiling fans are the same. Atop the Energy Star most efficient fans of 2018 are the Aeratron and Haiku line of fans. Most all of these have very low Airflow Efficiency by Speed ratios, which is essentially how much airflow is produced based on power available. The lower the ratio, the more efficient. These cost a few hundred dollars more than traditional ceiling fans, but cost as low as 5 dollars per year to operate according to estimates. This is due to ultra-efficient motors that are extremely quiet.  Newer models are also compatible with Alexa and other smart home devices.  Click here to check out the different types available.

While most average size ceiling fans will cost around 1 cent per hour to operate, opting to lower the amount of time your apartment’s HVAC system operates is essential to cutting costs

Turn off Electronics – I Mean, Really Turn Them Off

When not using that toaster, computer, lamp, or anything else you may have plugged into an outlet, most U.S. households can expect to save up to one hundred dollars per year by simply unplugging these devices, or turning off the power strip they are plugged into. While your savings may be less in a smaller apartment, it may be worth trying.

The Department Of Energy estimates that 5 to 10 percent of residential energy use is due to ‘standby’ power – when the actual devices themselves are not on. With newer electronics like computers and TVs, some actually have a chip that saves your settings when power is lost, unlike older electronics like alarm clocks and that will blink 8’s until you re-program them.

If you have hardwood floors in large areas, putting down a couple good area rugs can help insulate a cold apartment in the winter. You may also want to make sure areas exposed to temperature gradients – like patio doors are properly insulated. There are several kits on eBay and Amazon you can find anywhere from $50 to $100. I found one on eBay for around $50 that is basically an insulated tent that you crawl through when accessing your attic. If your attic is accessed via a standard door, a rolled up bath towel can do the trick.

If you live in an older apartment, be sure to make sure you notify maintenance of any gaps you may notice. A quite obvious fix, but an easy one to overlook. Also, outlet covers are another way to help insulate exterior walls to reduce airflow. Some have even found that exposed outlets on exterior walls were costing 2 to 5 percent each year by leaking outside air into the room. Plug covers are inexpensive, and can be picked up for a couple of bucks.

I hope you learned a few new ways for lowering your electric bill this season. While you may only be saving a few bucks per year using some strategies, try as many as you can this season – every bit adds up. Be sure to leave a comment if you have any feedback or additional tips.

Hi, I’m Baxter, thanks for checking out Conservative Ticket. I started this blog to share my knowledge with people looking to save a little extra money -for their small business, or everyday life.

As a college student, I was always interested in saving money any way that I could. I’ve learned a lot over the years from people willing to give back, and want to pass that knowledge on to others. In my spare time, I enjoy playing R&B, country, and blues music and call North Carolina home.